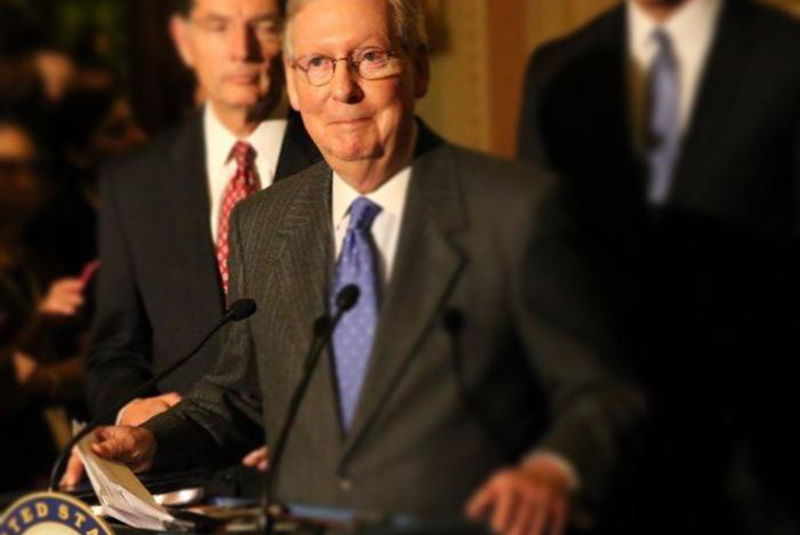 Senate Republicans introduced a new, less generous coronavirus aid bill Tuesday that includes a continuation of the $300 per week in enhanced unemployment benefits through late December, but, notably, no second round of stimulus checks.

The GOP’s so-called “skinny” bill, one of Congress’s first actions after its nearly month-long recess, includes liability protections for businesses and health-care facilities, more money for health-care funding and schools and a second round of funding for the Paycheck Protection Program for small businesses. Senate Majority Leader Mitch McConnell (R-Ky.) calls it a “targeted proposal” that could be voted on as early as this week, NBC News reported.

Republicans, Democrats and the White House are currently debating what to include in the next round of relief measures. In May, House Democrats passed the HEROES Act, which included around $3 trillion in aid, including $600 per week in unemployment benefits through next year and a second round of economic impact payments.

The Senate GOP balked at the price tag and unveiled the HEALS Act in July, a ‘skinny’ relief plan which included around $1.3 trillion in aid. Democratic Congressional leaders said they would not come to an agreement until Republicans increased enhanced unemployment benefits.

The new, skinnier skinny bill introduced Tuesday, is estimated to cost between $500 billion to $700 billion, according to Bloomberg. It does not increase UI and provides a fraction of the aid offered in the HEALS Act.

A second round of stimulus checks had been included in both the House Democrats’ HEROES Act and the Senate GOP’s HEALS Act, and was considered one of the less controversial aspects of the next relief bill.

In response to the skinny bill, House Speaker Nancy Pelosi (D-Calif.) and Senate Minority Leader Chuck Schumer (D-N.Y.) said in a joint statement that “Senate Republicans appear dead-set on another bill which doesn’t come close to addressing the problems and is headed nowhere.”

As negotiations continue, millions remain unemployed, and many coronavirus protections — including enhanced unemployment benefits and eligibility for the first sound of small business loans — have long since expired.

If you have questions about the federal government’s Coronavirus Relief Programs, check out the “Related posts from our blog” below, or contact the experts at Pinnacle CPA Advisory Group. Just call our office at (614) 942-1990, email info@cpaagi.com, or fill out the Contact Form at cpaagi.com/contact.